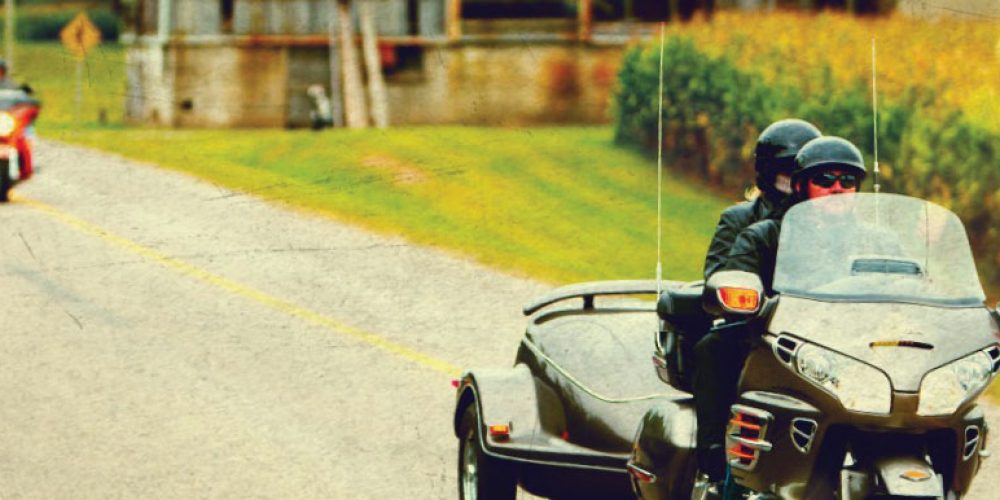 You know all this lingo already. But maybe some Cager will read this and decide to abandon his or her Civilian ways. They’ll need to learn some of this before they buy a bike. After all, the more motorcycles, the merrier!

Aftermarket – Parts and accessories other than OEM – See “OEM”

Apes – Handlebars that are very high

Back warmer – A girl on the back of your motorcycle

Bar hopper bike – The spit shined and polished bikes that only come out for show-off purposes (Shows, Bike nights, etc…)

Big Twin – Any Harley bigger than a Sportster

Biker – A person with a passion for Harleys; who owns a bike, not just a t-shirt; and needs no “excuse” to ride. People who have been doing it since before the Yuppie incursion

Bottom rocker – The bottom-most patch on a set of colors. It is usually the neighborhood that a club, or a chapter of a club, is claiming to ride in. See “Colors”

Bro – Short for brother. Used by one club member to or about another club member. Used to describe the kind of relationship club members have with one another; like family; brothers. It is not a good idea to call someone “bro” unless you are a part of their circle of clubs or club members.

Cage – A car, truck or other 4-wheeled vehicle

Cager – A person who only rides in a cage

Center patch – The insignia of the club. The middle patch between the top and bottom rocker, centered on the rider’s back. Sometimes given a name and sometimes called the “center pie”

Center pie – See “Center patch” – The middle patch between the top and bottom rocker, centered on the rider’s back

Chase vehicle – The vehicle, usually a van or truck, which follows a pack of riders to assist in case of bike trouble

Chopper – A motorcycle that has a greater angle on the front forks than is usually seen. So named because, originally, the front end was “chopped” (cut) off and welded back on at a wider angle

Chromosexual – The motorcycle rider who keeps adding more and more chrome to his bike, indifferent or regardless of its performance

Colors / Colours – A distinguishable set of patches and emblems worn on the back of vests by members of a motorcycle club. The emblems may also be called “patches”, “rags” or “cuts”. Club Colors are differentiated from organizational patches by the “MC” or “M” and “C” cubes next to the center pie.

Crotch rocket – Slang term for a sport-type motorcycle. Originally, so named, because it seemed that in order to ride it, you had to bend over so far that the engine and tank section were up your crotch

DILLIGAF – An acronym for “Do I Look Like I Give A Fart”. Fart? Really?

Dresser – A large motorcycle designed for long-distance riding. It is “dressed up” with hard saddle bags and a windshield

Easy Rider rifle rack – A set of aftermarket, forward foot pegs extended way out in the front of the motorcycle down tubes.

Featherwood – A female who is incarcerated

Hardtail – A rigid motorcycle frame with no shock absorbers

Hog – See “Big Twins” – Any Harley bigger than a Sportster

House mouse – A female who tends to drift from person to person within a club; a female who is responsible for taking care of the club or clubhouse, cleaning up after parties and tending to any needs of the Patchholders; or both

Ink – A tattoo (or multiple tattoos)

Kickstand – When used as a Road name, it’s the guy you don’t want to park your motorcycle next to. He got this name because on more than one occasion he forgot to put the kickstand down before walking away from his bike. Everywhere you go someone will know someone called, “Kickstand”.

Old lady / Ol’ lady – Wife or steady girlfriend. Has nothing to do with her age

Old School Biker –See “Traditional Biker” – A biker who lives by the protocols and traditions as set down by the returning GIs after WWII as it relates to behavior and respect.

One percenter (1%er) – A member of a motorcycle club, or the club itself, that does not necessarily conform to the general public’s perception of what is acceptable behavior. The term was made famous after the AMA expressed that 99% of motorcycle riders are upstanding citizens and only 1% acted outside commonly accepted practices

Patch holder – A full member of a motorcycle club

Patch over – When one or more members of a motorcycle club are incorporated into another club. The member(s) take the new colors and “patch over” their old ones

Patches – See “Colors” – A distinguishable set of patches and emblems worn on the back of vests by members of a motorcycle club. Could also be called “colors”, “rags” or “cuts”

PMS – An acronym for Parked Motorcycle Syndrome. A condition suffered when a biker has not been able to ride for an extended period of time

Property patch – Worn to signify that the wearer is the Ol’ Lady of a club member. Although some people feel that this is degrading to women, some property patch wearers feel that this is a security blanket; as long as they have a Patchholder’s name on their back no one will bother them, where ever they may be.

Prospect – A prospective member of a motorcycle club

Rat bike – A motorcycle that’s been kept running, or together, by any means possible, usually with mismatched parts or parts that are not usually found on a motorcycle

Road name – A name given to you by your brothers or club or because of something you’ve done that makes you stand out. A nickname. (See “kickstand” for a better explanation)

RUB – An acronym for Rich Urban Biker. A term used to describe the people who buy Harleys to look cool and who have more money than the passion a biker has for riding

Scoot(er) – Term for a Harley

Sled – Term for a Harley

Three piece patch – See “Colors” – A distinguishable set of patches and emblems worn on the back of the vests by members of a motorcycle club. Sometimes, in reality, there are three, four or five patches on the back of the vest, but the term refers to, specifically, the top & bottom rockers and the center logo

Top rocker – The emblem located at the top of the back of the vest, which is usually the name of the club and is usually crescent shaped.

Traditional Biker – See “Old School Biker” – A biker who lives by the protocols and traditions as set down by the returning GIs after WWII as it relates to behavior and respect.